Light up the foreground

But I must explain to you how all this mistaken idea of denouncing pleasure and praising pain was born and I will give you a complete account of the system, and expound the actual teachings of the great explorer of the truth, the master-builder of human happiness. No one rejects, dislikes, or avoids pleasure itself, because it is pleasure, but because those who do not know how to pursue pleasure rationally encounter consequences that are extremely painful. Nor again is there anyone who loves or pursues or desires to obtain pain of itself, because it is pain, but because occasionally circumstances occur in which toil and pain can procure him some great pleasure.

I would always recommend using the manual exposure mode to avoid the exposure changing from one frame to the next which can cause an annoying flicker in the final time-lapse movie.

Pete set the white balance on his D4 to daylight, and used an ISO range of 4,000 to 12,800 over the course of shooting at Joshua Tree National Park in California. Shutter speeds ranged from 15 to 25 seconds. Pete manually focused the camera on the closest trees in the foreground.

Both Pete and his assistant held Nikon Speedlights with colored gels over the flash heads. During the time the shutter was open, they would “pop” the flashes, to illuminate the foreground trees and boulders. With Pete to one side of the camera, and his assistant on the other, they began painting with light from a distance of about 15 feet from the camera, each moving further from the camera, on an angle that brought them close to the subjects in the foreground. This allowed the light to be more dimensional, wrapping around the trees. Each was able to pop off from two to 10 flashes from each Speedlights during each exposure. Pete explained that while the Speedlights aren’t constant light sources, you still need to be aware of where you’re pointing the flash so you don’t end up with hot spots in the image (overexposing a portion of the photo.)

I would argue that Peta Pixel and Fstoppers are bad examples. They are not photography blogs, they are clickbait traffic blogs that talk a lot about cameras. They have very active comments where people insult each other and where photography itself is almost never addressed. They contribute next to nothing to the photographic community as a whole. 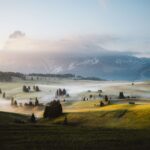